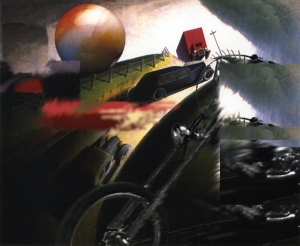 "Curve" by Chrome Underwood "...Now where did you think you were going?"

Time can curve back around on itself like a mountain highway,
the daylight is not a guarantee that everything will turn out all right.
Blind curves surprise as much as the lottery they say,
sometimes a blinding flash of intersection
turns noon into eternal night.
Where did you think you were going?

Does it all flash by you as you sail off from asphalt into air?
Do you think of those you are leaving behind?
If there are witnesses.. do you really care?
Are those last memories, the last visions you see?
Prom night and contraband, sleeping in the backseat,
wanting and feeling the need,
the windows rolled down on your father’s borrowed car,
while you both pay worship to the speed.
Now..
Where did you think you were going?

What are the last sounds you hear as the grill breaks through the rail,
a bull moaning in a pasture for a love cow along the trail,
the chopper’s  down shifting of gears coming up on your tail,
or a cartoon -red truck climbing up the next grade,
sitting on his horn waking you up,
just in time to see his bumper, and hear yourself wail?
Now..
Where did you think you were going?

*Please read my comment about the painting and artist

This entry was posted in Poems. Bookmark the permalink.