We Are What We Watch

I have never mentioned this in a blog post, but most friends in Second Life already know that between the hours of 6pmslt and 8pmslt I am usually unreachable, as it is my Sacred Video Time shared with my buddy Menubar Memorial. Unbelievably, and I am rolling my own eyes here, we have been doing this for more than 15 months, and rare are the nights, maybe counted on one hand, that we have missed our Video Hour. The irony is, I only watch television, and TV series in Second Life (addicted much?) but it is because TV is not interactive enough for me. There is so much more fun to be had, sitting with someone thousands of miles away, kibitzing and commenting in local chat on what we are seeing at the exact same time on his giant screen, perched up high in very tall chairs, nibbling on super-sized donuts, “The Cabin” as we call it, was Menubar’s first decorating choice because we were starting Twin Peaks way back when, and he wanted to put us in the  black-cuppa joe-donut-mood, that Twin Peaks was so famous for.

We have seen such an incredible number and eclectic variety of movies, and entire season’s of TV shows, that my small mind probably can’t remember them all here, but they go from everything David Lynch made(or dreamed of making) Huff, The Sopranos, Roger Water’s The Wall, Lexx, Trailer Park Boys, My Name Is Earl, Stingray Sam, Star Trek ( Deep Space Nine and The Next Generation) The Wire, lots of quirky weird movies Menubar finds from all over the world, like Big Man Japan(we invited Crap Mariner to share that one with us ) to now finally what we are totally engrossed in, thanks to my SL sister Maria Vought, owner of a really popular and fabulous Sim called “Natural Wilderness”, who suggested it.  Dr Who is a series that has lasted 49 years, but we are beginning it from 2005 to present time. I found a few random moments of Cabin Video life I will share with you below. 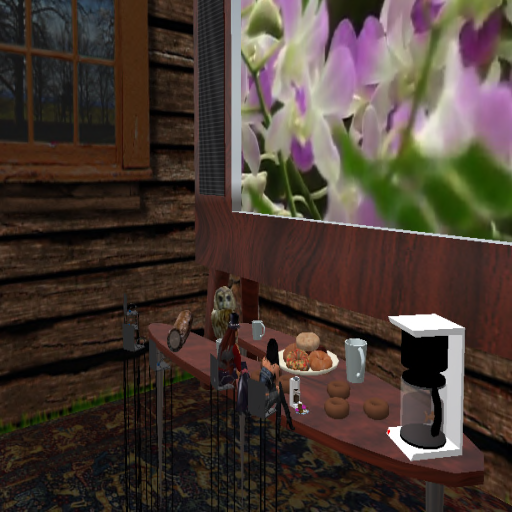 It all started with Twin Peaks..warming up with an Intermission video

The Cabin was designed to get into the mood for Twin Peaks. Every time we saw that robin come on the screen, and heard the music, we felt like we were coming home to heaven.
Menubar even added the Log Lady’s log, the Owl and the fish to the coffee pot for you Twin Peakers out there, who remember all those little surreal David Lynch details. 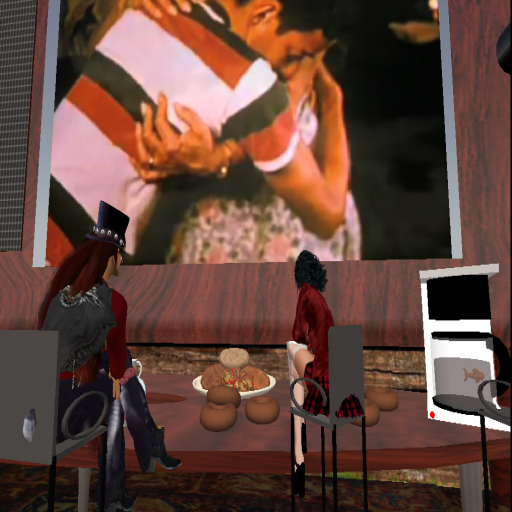 A favorite to warm up with, was a great music video Menubar did for Seba Sideways and Tukso Okey dual streaming, called “Sold My Soul To The Devil” I have it on a post I did about Tukso and you can see it there embedded at the end, above a poem I wrote for him.

Jeff Wayne's War Of The Worlds

A few times we did move out of our habitual north woods habitat, and go down to enjoy a concert or a special surround video in the Dome, events like Roger Water’s The Wall Live in Berlin, because a show like that is too hard to just sit in a high chair and not get up and dance all around to it

A new video set by Menubar to honor the movie Dune

For David Lynch’s Dune, Menubar put us out on the sands in such a way, we felt like we were really there with both of us nervously looking around for those tell tale signs of bulging underground Sandworm movement in our direction. Awesome! Can a living room at home ever compare to this?

For the last episode of Star Trek, which took us months and months to get through, even watching 3 at a clip, we got all dressed up in role and proudly put the final seal on the fact that we were now officially Second Life Trekkers!

Happiness Merryman joined us for a Dr.Who

Happiness Merryman of 2nd Life Stories joined us one night for Dr. Who and took this great shot for her blog  Now Menubar has added almost all the cast of the major series we have seen together (plus all the posters he has done for my poetry readings.) Our Cabin is filling up with 15 months of nostalgia and history, and we are getting more visitors too. Gracie Kendal (of the 1000 avatars project) has become a regular in the last week. This brings me to my theory, which I will try to prove in only a few short sentences and two photos submitted as evidence to support it.,

We are what we watch..and we are watching a lot of Dr.Who.

If we are what we watch, and we are watching a lot of Dr. Who, there is a real possibility we might pull in the good Doctor, or at least some of his fellow travelers at any minute. So when a week ago, I received an IM from someone who had just been to a poetry reading I did, and I saw on his profile that he was a “Renegade Time Traveler” ( Dr. Who being the last of the Time Travelers) I did not hesitate to ask for a ride on his TARDIS. ( Time and relative dimension in space) the best space ship (disguised as a Police Box) in the whole universe. Last night I actually took that ride…

I did the quickest change into Rose (Dr. Who’s cherished traveling companion) I could pull off, before the TARDIS landed, or should I say appeared, on my island. I was digging way down deep to find my blonde wig, knowing my rather long nose was unlike her turned up one, but trying to get the feel of someone familiar, that the TARDIS and its pilot, might easily and comfortably welcome. The Renegade Time Traveler, also known in Second Life as Emperor Nobilis, was an amazing host and took me to see many lands, and many undreamed wonders of the Metaverse. It was like being in a second level virtual voyage, a virtual dream within a virtual dream. Is watching a flat screen TV on a Friday night with your cat ever this much fun?
Then today my theory was again proven when I was invited to the first Combat Card Tournament on Splintered Rock. I, who have been gorging on sci-fi characters through my eye-balls recently, now have a Combat Card, designed as my own character, one I played quite a while back, but ironically it all came home today. See Post: “Was It The Spice?” To view the entire Splintered Rock Deck of Combat Cards click the link. Combat Cards are copyrighted by Doc Boffin and Osprey Therian.
I will close with this thought I was pondering tonight. Luckily Watermoon Breeze Menubar’s fabulous Sim which has his goodies for sale, and his video dome, is PG. I thought, good thing too, because the way I am pulling into my “real virtual life” what I am watching on the big screen, I think we are so much better off that it is not rated…umm Adult. I mean who knows what I could have become?….or Menubar??!!
The mind careens on the outer edges of a black hole thinking like this. 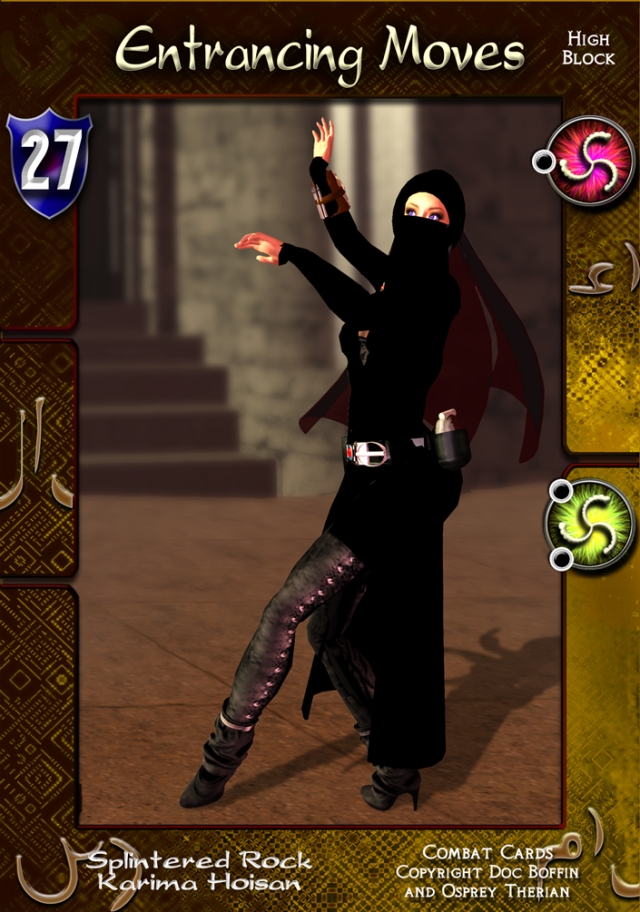 They should have called me “Dangerous Entrancing Moves” as…Entrancing is my middle name..

This work is licensed under a Creative Commons Attribution-NonCommercial-NoDerivs 3.0 Unported License.

5 Responses to We Are What We Watch