Heresy Of The Intimate

Heresy Of The Intimate Kitely-Virtual Worlds On Demand

If you are following my Colored Dream Series, you will know that in Part Two we meet a sphere with a very strong essence called The Intimate. From a parallel world he comes, and our Karima of the story falls madly in love with him. Part dark… part light, he is an enigma and a paradox and he has finally found a place to rest after being ejected from his own world for loving one he should not. This story is about to come to an end, and perhaps I am prolonging that eventuality, by finding myself in another virtual world (a heresy in its own right I might have said a week ago) creating my imagination’s virtual abode of the Intimate. How did this happen?

Locus in the new Red Period

Locus is now moving into the new Red Period or as I have said to the creator DB Bailey, it has the Bailey Touch, everything and anything he touches lately on his sim has turned to red. Locus, through all of its changes has been where I shoot my photos for the Colored Dreams, a continual inspiration, and I would say a sort of mystical leader that moves the story in other directions  than I am even planning, just because the sim is always in a state of flux..morphing from one beautiful stage to another, sometimes more subtle and sometimes like now, earthquakingly  powerful with shifting appearances and mood. While this Red Period was being developed in SL, DB got involved in a new virtual world just starting to rise out of the virtual waters called “Kitely – Virtual Worlds on Demand” He invited me to see his build there and of course how could I refuse? There is a small hitch that in order to visit someone’s world or acquire your own you need to be a Facebook user (and I am so not into that but…) but I already had an account and it is the policy at the moment. So, I befriended DB (David Denton) in Facebook, and went to see what he was up to in Kitely. 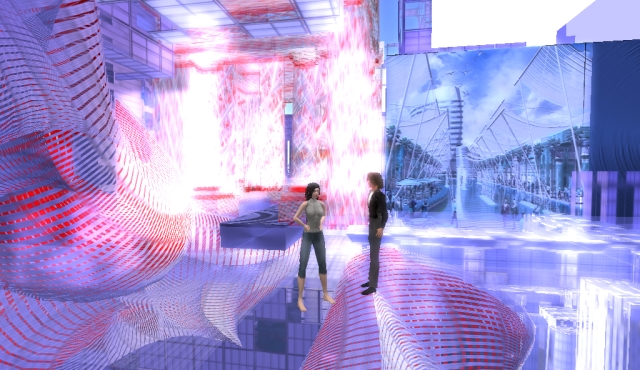 The pastel dreams on Kitely are alive and growing

The pastel dreams on Kitely are alive and growing, and I found myself in the dubious pleasure of being a noob again with bad skin, no AO and well, all the rest, but it was great pleasure to see the new build coming to life and to have my eyes opened up to the possibility of inhabiting more than one world, something I have been doing in the “Colored Dreams” for the past few months. I have been sort of a rabid supporter of Second Life, even with all its faults, it is not easily beaten. I have never been interested in the many alternative worlds that have been springing up right and left, but I see in this one, Kitely, where basically you pay for the time you spend there, and you pay quite economically, the possibility of maintaining an island as almost your own art installation. Here you can work, build and create and then invite your friends to see it, and make another. This is what I would love to do,  even though I know almost nothing about building (and it shows) I do know how to let my subconscious pour itself out on a sim, and I feel this system makes that very possible. I won’t go into a sales pitch for this new world, just say I am enjoying it very much on many levels and that I had a chance to have a small email chat with the CEO and Co-founder Ilan Tochner and I really liked what he said, and I quote him,
“I’m very happy to see Kitely used for art, one of our goals was to enable people to easily express themselves and share it with others.”
Since there is nothing for sale, and I don’t know anything about importing more than script codes and textures, this will be a challenge, but a creatively addictive one I already see. I wrote a post a few weeks back saying “We are what we watch” well now I am beginning to see, ” We are what we write” as I slowly open up the possibilities of a parallel universe in the virtual sense. I am writing my last chapters of the “Colored Dreams”, sipping coffee in my tent overlooking a hostile landscape with dabs of colorful beauty. I have even had a few visitors, and two after being there, created their own worlds. I see this as not a replacement for Second Life but a great compliment to it.

A dear friend and I in my tent on the hill

They are offering a trial period now, as it is just beginning and is in beta, to create your own world and they will give you the credits to be able to see if you enjoy it, before you have to pay, a good marketing idea, as it is very, in a nice creative way, addictive. As I said before I am not promoting this world for any other reason than I just feel very excited about it, and am so glad DB Bailey dragged me there kicking and screaming my mantra “I don’t want to go to any other virtual worlds”

meditating on the rocks with a visitor

I leave you with this last image of a rotating light sculpture I have created using mostly tricks and mirrors and shabby building technique, but as DB mentioned when he came to visit, lots of drama. I have maybe 3/4 of a sim left to do and about 96,000 prims to spare. Just that fact alone makes my heart sing out like an operatic soprano.

Dreaming the dream out-loud on Kitely

8 Responses to Heresy Of The Intimate