Someone asked me what this title, which is the title of my latest YouTube offering, really meant, as it could be taken in the more literal “Bang Bang” sense, instead of the photographic one. Well this latest offering of poetry, music and imagery was created for an architect, artist and photographer who has done more to stimulate my own muse, than just about anyone I know in either world, my friend DB Bailey in Second Life, David Denton Architect out there in the physical world. His current Installation on the virtual campus of Stanford University Libraries, was created to celebrate the opening of a new Library on the Stanford Campus in Real life. He chose the title “DB Shoots DB” as it was designed to showcase his photography that he has shot and collected from his many builds and installations here in Second Life. This is more of an RL event than an SL one, but the installation will be up for awhile, and I think it deserves to be visited just to be able to enter and be surrounded by the beautifully unique structure he has created for the occasion. His photographs will be displayed as a rotating slide show and also will be seen in his rooms made from them. There is a movie screen that you can watch a streaming version of the YouTube below.
I must say that working with DB has been both a challenge (bordering on the traumatic) but very rewarding  too. The part that makes his builds always so interesting and alluring is also the part that makes it a little hard to keep up with him and pin him down on when he thinks it’s “finished” His Art is in a constant state of change..and flux..It is always changing, and perhaps that is why he has such a vast collection of photos on Flickr (David Denton Photostream). I am witness to the fact that photos shot in the morning and then shot again a few hours later, might look like a totally different place in time and space. One time when I was writing “The Colored Dreams”, I welled up in tears as a place I was using and was going to use again for my illustrations looked like a hurricane had hit it, it was in blown down and tumbled disarray. When I said “What have you done here to this beautiful room? “He answered, and this is a paraphrase, but basically he said “Don’t get too attached to anything I build, because I don’t.” I realized then, that was how it was, and he lived his Art and his gift in that zen moment of here today but probably not tomorrow. This is a new concept for me, as I am a nostalgic poetic type who likes to drag it all along behind her, and also I am more secure when I think I know where I am heading. I spent time daily watching him work on this installation and I began to take some pictures when he asked me if I might write a poem for it. Then as it morphed and grew he asked if I would like to make a machinima about it, and I was so excited about that request I began immediately to compose the music for an airy, light netted  and chambered structure surreal  and hard to define..and then I was writing the words and it grew and changed slightly…then I was shooting a few scenes and before I knew it I had it almost all together, when I came the next day, the feeling had turned into something else..The build looked like it had eaten itself  in the night and grew into a hot plate of heaviness, with lava chambers, and wow I was so shocked, I thought, “Oh now I will have to throw it all out! This is not what I filmed or wrote about..Well we did that dance a few times, DB changing his mind and his direction, and this poet frantically changing her lines,trying to keep up. Then one day he said,”Well I will be done on Friday and I won’t change a thing after that.” and I said sort of half kidding, sort of not, “Well if you change anything after Friday, too bad for you.” He agreed on that “too bad for you” clause, and assured me the poem would still fit and I pushed ahead and finished it. So now, if you see this video and someday see the finished structure (which is being changed a bit more, no doubt, as I write these words) you will see my video has little to do with what was settled upon, although the very last scene is from the final stage, but it does bear witness and capture in words and imagery the process, the history, the magic of the flow of creativity. DB knows how to ride this flow and see it through to whatever it whispers in his ear it wants to be. I learned in this whole process of collaboration, how important that is, that both just flow and not try to set end-lines, or expectations, or hang on too long to what has been created, because no matter how beautiful, its time will pass too, and it will change into something else.. So on that note I invite you to see my video “DB Shoots DB” and then to take a look at the build in person when you can. His photographs of his past installations are both beautiful, dreamlike and almost futuristic and alien in feeling. I think Stanford University Libraries chose wisely when they invited him to create a space there for their RL event. DB’s artful build is the sweet delicious dessert that beckons and captures the imagination of anyone who is lucky enough to be invited to dine there. “Dessert will be served in the Library…DB Shoots DB”

I went back to have a look just as I published this post, and was not surprised to see an even more beautiful version of this morphing design. I include a few photos after the video so you can see the “final stage” to appreciate  what was captured in the video was only a few growing pains in its short but artistic life.

Dessert is now light and served on gold plates 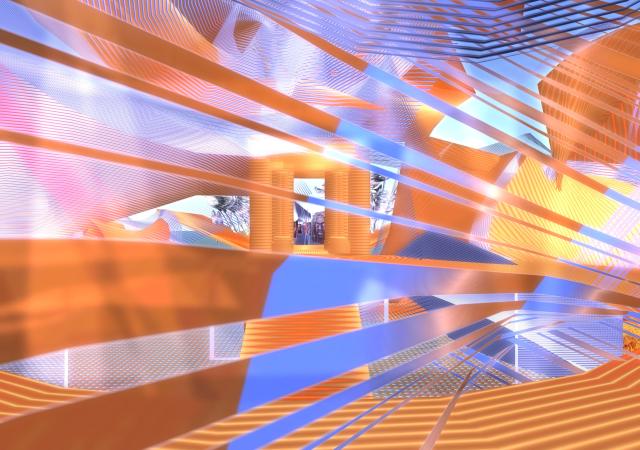 Some thick bands of light captured a second before they disappeared

**There is no direct landing point by the way, so if you use the LM to Stanford University Libraries I have linked above, it will not take you directly to the build. Just fly up a little and look around, you can’t miss it.