“Sweetie… All I Did Was Mute You”

This short post is actually more of a public service message, a sort of sharing of the collective experiences we live and learn in Second Life. It is also a warning to clumsy avatars, I am included here, who can pose a danger to others and themselves by pushing the wrong buttons at the inappropriate times.
Now, the story…
When my friend Camille invited me for a drive on a beautiful late afternoon day, in a post- apocalyptic desert wasteland appropriately called The Wastelands , I immediately dropped everything to be there for her. The afternoon was cooling, there was a slight breeze and the scenery of shattered and battered shacks with bending telephone lines was both surreal, and refreshing in an odd way, that perhaps some of us can understand. 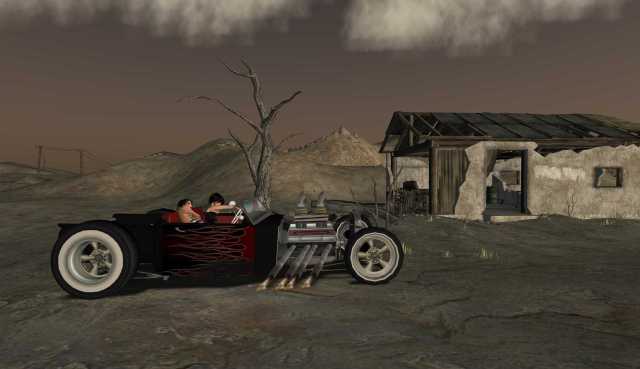 a desert breeze with the top down afternoon

Camille has a special way she drives when she is in the desert that can only be described as reckless. She was doing full 360 turns, kicking up dust, frightening the jack-rabbits and making me whip around like someone who had about 9 g’s of centrifugal working against them. We tore ’round ‘n ’round an old tattered shack about three times, until she finally headed us out onto what was maybe at one time, a sort of road that the bended telephone poles marked like an end- of- the -world highway. 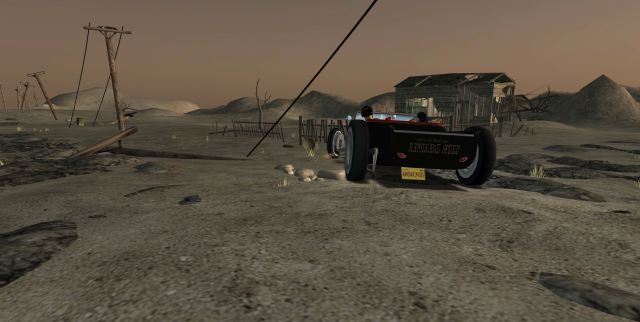 I admit to loving speed and the throttle pushed to the floor, and there didn’t seem to be much danger to anything out here but ourselves, so I began to relax a bit and take in the scenery that could have been taken straight from the opening scenes of “The Book of Eli“. There is a comfort and false confidence that burns bright when you stop to reconsider that we were still here after The End, and though it was a Wasteland it was a reminder of the gritty leathered survival of the few animals and even ourselves who had what it took to live on. The ozone and a faint odor of what might have been long-ag0- dehydrated jet fuel filled my brain and I closed my eyes and heard the roaring of the engines. Camille silent in her own post- apocalyptic internal ramblings…the sun retreating… it was really a good moment….until we slid down that first embankment..

"...until we slid down that first embankment.."

My neck whip-lashed and pulled me from my reveries of post war implications and I realized that Camille had not let up on that gas pedal and that we were lucky we didn’t flip 14 times, but she pulled and battled with the wheel like a captain on a stormy sea and we actually made it to the bottom, our mouths wide open in shock, but still upright. I guess I am building up to what happened next, by trying to blame a little bit of it on the fact I had just lived through a near-death experience, and so had more adrenaline than brains working at the time. Really, a substantial part was Camille’s fault too. I asked her to stop as I was hoping to take a picture of one of the picturesque shacks that I was seeing, and I thought that when she screeched to a halt that meant she was stopping to oblige me. I made the grave error of standing up to get a little better angle of my shack of choice when, and I am really not sure how I did this, as I have never consciously done it to anyone in my 3 years of SL before..never on purpose have I muted anyone and yet I muted Camille while she was starting to pull away..and I blew up most of the car, really, and caused poor Camille to mute out into a ghostly specter, the color of Wasteland dust, sitting on her seat, suspended on nothing more than the shadow of her former car. WOW!! I had no idea that could even happen!! I did not realize the power of the mute button, the sheer destructiveness of it..to pulverize steel doors and body, leaving only the rubber tires and the seat, because it was made out of red leather(?)  defying the lethal mute blow, that took the rest of the car away in one flash. I was so horrified as to what I had done..I couldn’t even stop taking picture after picture, like a shell-shocked photographer on the front lines..and I knew what I did….that was the awful part of it and poor Camille could not even say “what the.. huh?” as she was so wrongly, clumsily, erroneously muted by me. I surveyed the damage and said a prayer that what can be done can also be undone. I pushed that evil mute button one more time and sure enough, it all came back like it was before. The color returned to the paint-job, and to poor Camille’s sallow cheeks, the seats aligned on the metal chassis and the first and only thing I thought of to do, when she gave me “that look” was to throw my hands up in the air and say, in my most charmingly innocent fashion,
“Sweetie… all I did was mute you.”

"I surveyed the damage,and said a prayer"

The lesson learned was “Do not mute and drive…even as a passenger” I hope this might save someone else from having to go through anything similar.

This entry was posted in Slices of Second Life and tagged Camille Topaz, Karima Hoisan, second life, The Wastelands. Bookmark the permalink.

4 Responses to “Sweetie… All I Did Was Mute You”