"I had been seeing these posters ..."

(please open this music link in a new tab to enjoy while you read my poem)
Ramblin Man~Hank Williams
For months I had been seeing these pretty posters up and down the track
Made a note in my Google calendar to buy an outfit and pack a snack.

I was the first one there

I was the first one there, or so it seemed as I sat down at Pawpaw Station
The empty tracks kept staring me back ’til I thought it was not the location.

My little humble hand car was what I chose, and I planned to ride behind
A  noisy  parade of locomotives, I imagined, of every color, size and kind.

"...the Organizer of the Rally was sitting on a horse

But ironically, the only other (barely) human being I saw waiting on the course,
Was the Organizer of the Rally, who for some reason, was sitting on a horse. 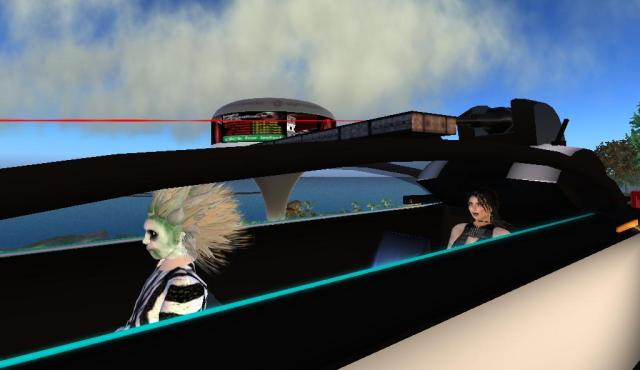 Well we got to talking and he seemed sad as I was the only other one who came
I said”Oh take me for a train ride? To waste this day would be a total shame”
He said, “I have one I call the Dog Catcher, hop in and please don’t take offense.”
It whispered: Your Engineer is DOUGIE Flossberg, sit down we will commence. 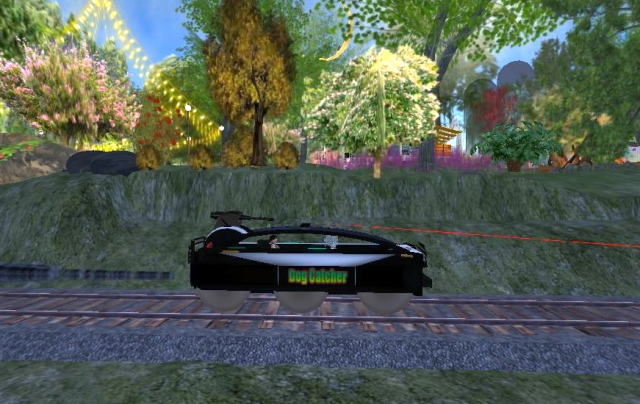 "To waste this day would be a total shame"

We took a spin in the country, then doubled back, to see if others might show late
Damion had arrived by then, he had his coach and engine waiting at the gate. 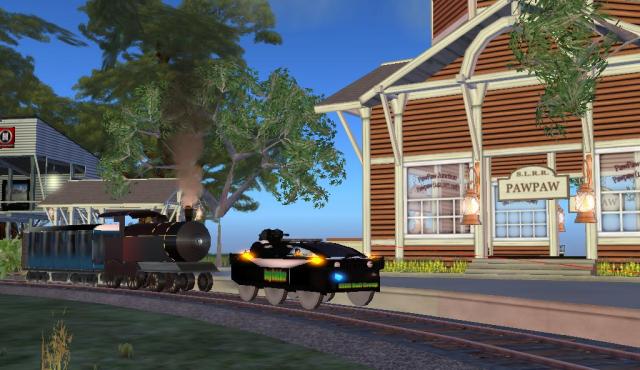 We moved out slowly in a two train parade, the cars were swaying and tossing
But only Damion Goodman’s train survived, that next hazardous region crossing. 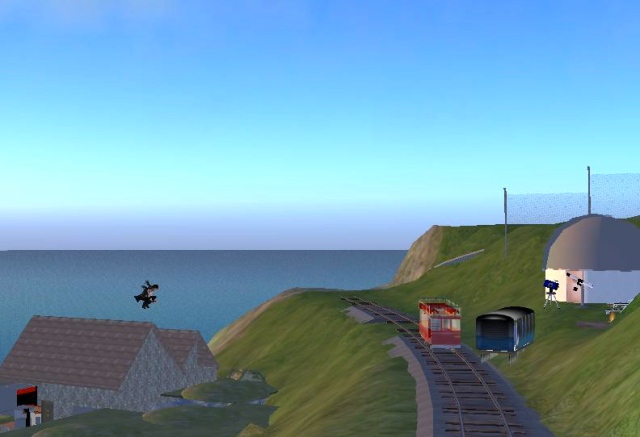 I flew up in the air, DOUGIE flew out of the world, and only one train was rolling
I  jumped in the coach car, yelled, “thanks for the lift to wherever you are going.”

I yelled, "thanks for the lift"~ Damion Goodman's train

This locomotive bucked like a bronco, it rocked, rolled and it really swayed
Along the high narrow tracks looking down on the sea, I began to feel afraid. 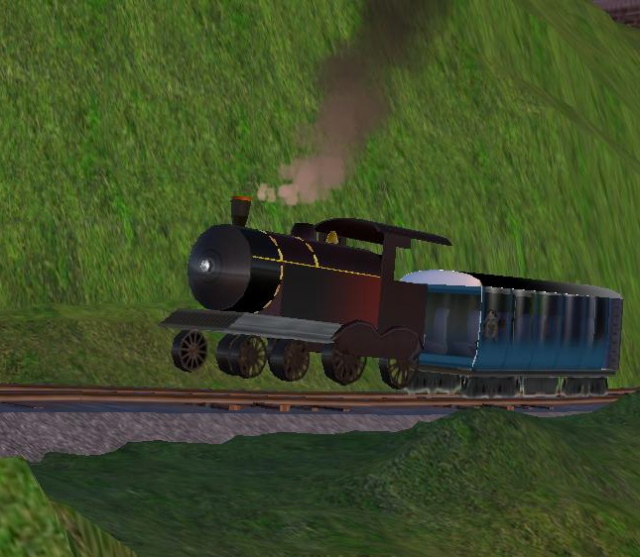 rocked, rolled and it really swayed 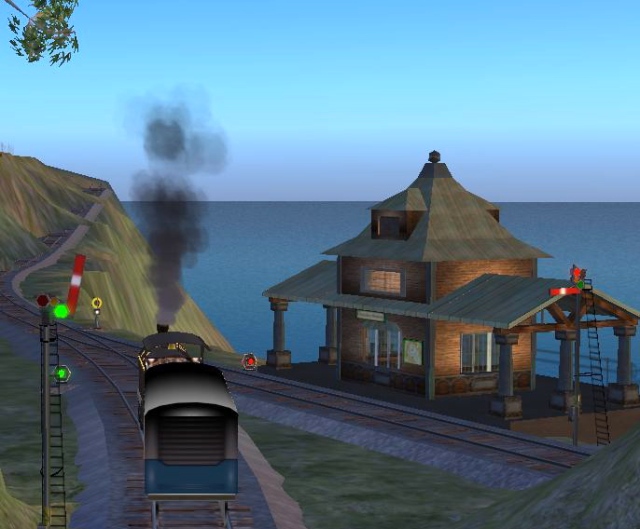 the high narrow tracks looking down on the sea

Then the day’s luck began to get better, I was rescued by DOUGIE’s best train
Car after car of state of the art textured deco, made all others seem quite plain. 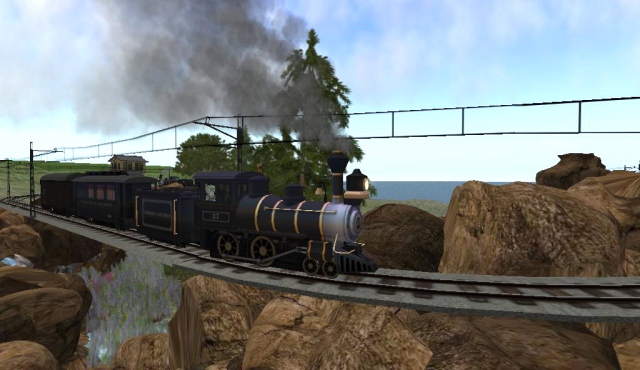 Well it just kept getting better, this train rode like royalty, and I felt like a queen
Then I was escorted to yet another train, surely, the longest one I had seen.
He let me drive it myself (it was programmed) to then return to the start
I fell in love with the control panel, the paint job, the whistle spoke to my heart. 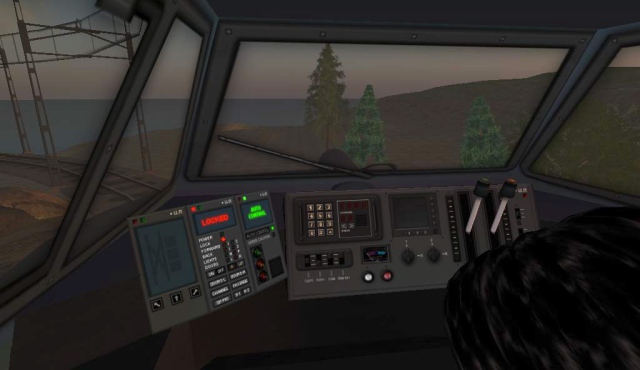 I fell in love with the control panel

I fell in love with the paint job 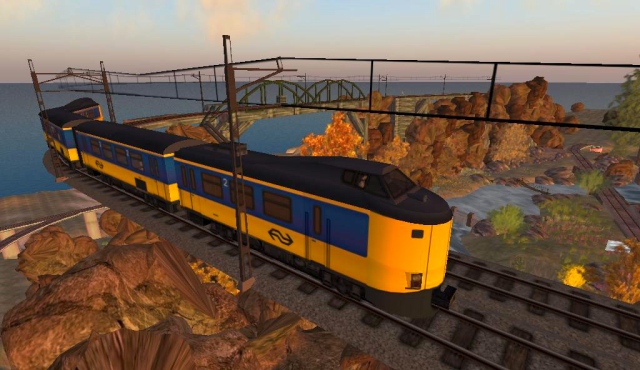 the longest train I had ever seen

So what could have been a disappointing day, turned into a private tour
with two charming rail engineers, who made me feel  welcomed and secure
When I said my goodbyes and thank-yous, I was given a free train of my own
I smiled at the dials, and thought, “might be a fun one to ride all the way home”

I smiled at the dials