Well to say that Natascha and I were nervous was a total understatement today, as I sat crossing and uncrossing my legs, and Nat fidgeted in some carefully camouflaged dance moves. We were more than a full hour early for this prestigious and long awaited awards ceremony, and each minute we were getting more nervous. The setting was beautiful and ample cushions were starting to be filled in with the audience who came in a steady stream the last half hour. This was the most highly anticipated Art and Machinima Festival you could find on any grid, nothing else could even compare. 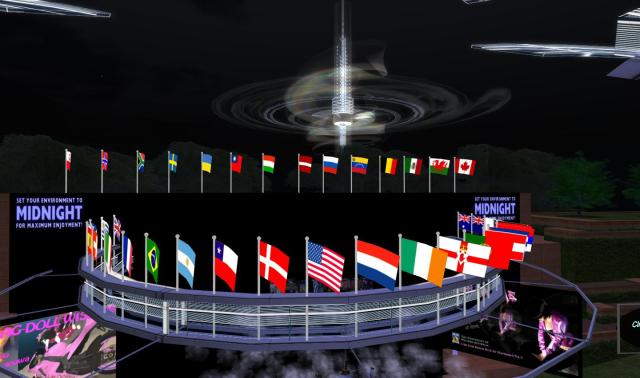 We were treated to a wonderful show of light, dance and precision by The ChangHigh Trinity Sisters to begin … Just beautiful! 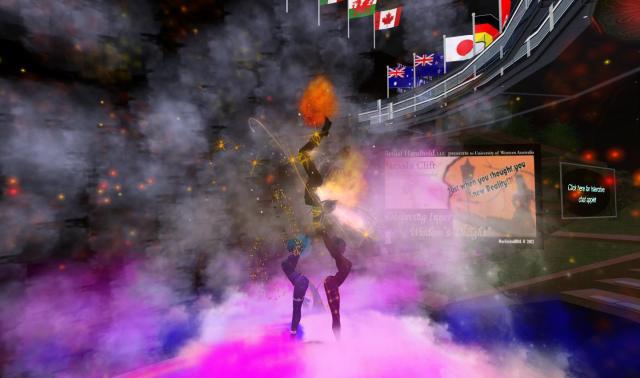 Our nerves were increasing with each particle burst..I will speak for Natascha here too as we were in back and forth IM’s and all of them said, “I am sooooo nervous” 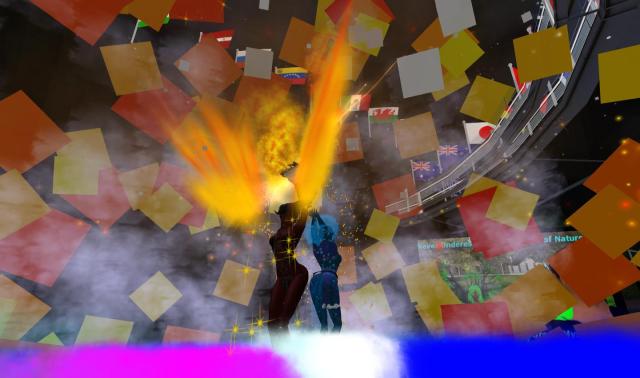 A Grand Finale and then on to the prizes. (photo by Nat)

For a complete list of all the awards given I will refer you to the excellent re-accounting on the official UWA blog which you can find here: UWA blog post on the awards
My little post today is just to share with you, my readers, a personal slice of the feelings emotions and surprises lived at this anticipated ceremony.
Posters of the films were also awarded prizes, and I want to point out that our film’s poster took a third place, designed by the artist Huntress Catteneo who took home 8000L$. I also want to congratulate my friend RAG Randt who took home 10000L$ for 2nd place with his great design of the Poster for the film “Running with Scissors” and of course to the winner of this poster competition, violette Naidoo (L$12,000) for the poster of the film: “The Last Syllable Of Recorded Time” Here they are below: 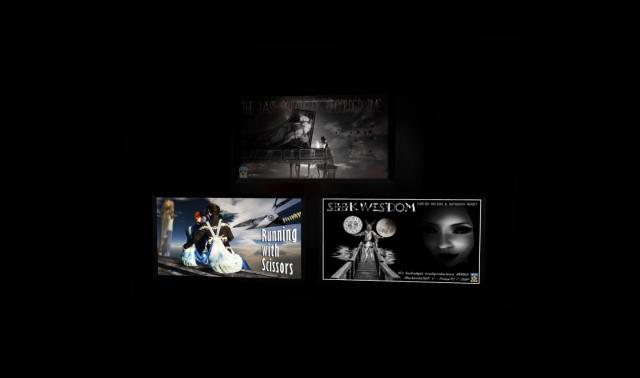 Congrats To The Three Winners (photo by Nat)

Audience participation was also rewarded with the lists that came closest to final judging.
Congratulations to the winners of that, Samara Kasshiki, Chic Aeon, and Charles Hera.

OPEN THIS END AWARDS OF EXCELLENCE also gave out prizes to the competitors, who were chosen by their independent team of judges. I personally did not know about this part, so was happily surprised to see that our film,”Seek Wisdom” was included in a very illustrious group of four machinimas  as winners in the category of
OPEN THIS END CINEMAPOP AWARD OF EXCELLENCE IN FILM 2012. It was like a delicious taste of the succulent pie of recognition being served in this banquet of awards.
Congratulations to our fellow winners, Hypatia Pickens, for “Still Watching,” pallina60 Loon for “Colours” and Spiral Silverstar, “Seeking Wisdom in The Stars”

Natascha and I were sitting in the front row, wringing the moisture out of our palms… our combined heart beats sounded like a syncopated House Dance rhythm. The adrenaline was making us hyperventilate..you know, all the symptoms of pre-panic panic attack.

The Moment of Truth begins (photo by Nat)

I will be very honest here, Nat and I believed we had a good film, we believed it when we mutually decided it was ready to be sent out into the world (as Nat put it) but knowing the competition, the level of artistic excellence that was being represented in the 51 entries, we considered it lucky and very honorable if we could place in any one of the ten places or the special prize. We were hopeful, but not totally convinced and so the nerves ruled, and we each sat silent in our own prayers. As I said I won’t list all the winners, and many joint winners of the night, I will just skip up ahead a bit to when JayJay Zifanwe, principal organizer and our host,  had gotten to the Fourth Prize and we were still holding our breath, as we had yet to win. When we heard there was a four-way tie for Third Place we just went blue in the face, putting our breath holding into 4-Wheel Drive, and thinking, “Well this is it..it’s now or never.” This was our first time as entrants to this International Festival of  3d Art and film and I don’t know if others more experienced went through what we were going through, but I was almost ill by that point from the anticipation, and the unknown answer, to our thoughts,”Will they call our name?” I mean what a photo finish of greats he was calling out, Tikaf Viper for “Run Ram,” (who was my personal favorite to win First Place) Hypatia Pickens for “The Four Gods of Folly,  Arrow Inglewood for “?” and and…you could have dropped a meteorite between us and we would not have noticed, we were hanging on this last unknown name,
“and…
pallina60 Loon for “Colours”
At that second I felt I had fallen down an elevator shaft and all my hopes for taking home a prize from the UWA V were laying dashed on the bottom. I sent off an IM to Nat, “Well it looks like we bombed out” and she answered, “Yeah”

“Well that’s it Nat, we bombed out”

So….please believe me, we were not sitting in our seats waiting to be called for the next prize, 2ND PRIZE IN THE OVERALL!!. I think when JayJay called out our film “Seek Wisdom” I  thought it was any one of the others with the same name, but when I heard our names attached, I think I let out an OMG in chat and seriously felt light-headed and giddy and a little crazy.
That’s the slice of pie we took home, a really big piece too, that can be shared  easily with all our friends supporters and everyone who believed in our little film. Oh, and we received 120,000L$ too… so, drinks are on us:) The grand First Prize was well-awarded to Tutsy Navarathna for ‘The Last Syllable of Recorded Time’   Congratulations Tutsy on your 3rd winning year in a  row (2010 – 2011 – 2012)
I will repeat the words I said on The UWA blog,
“So many people to thank, beginning with the organizers and the judges for this year’s UWA V Machinima Challenge. For me personally, this feels like a fairy tale, but looking back, I see many people to thank. I would like to first gratefully acknowledge the fate that brought me to SL, and all the people along the way who have encouraged me, first as a performing poet, and then a composer, and then  finally a machinimatographer. My friends here, my partner, and many in RL too, who have encouraged me to try new things, and not be afraid to take chances. The final breeze blew in an incredible talent, who harmonized so well with me in the creative aspect. I am speaking of Natascha Randt, who made it possible to begin our Costa Rica-Germany connection and seek wisdom together. I thank you all, and am truly honored to receive this prize. I also want to include the judges of the Open This End Awards of Excellence, who voted  for our film as one of the winners of the Open This End Awards of Excellence In Film 2012. My most sincere thanks for your consideration and your prize.
Against all odds…I now put the 2nd Place Winner of the MachinimUWA 2012 for your enjoyment,in case anyone has yet to see it,  and let out a great big and joyous, WOOOOOOOOOT!!!