“Andiana City” (the beginnings of the Train Saga poem#1)

My SLRR Train Saga will take place on the Mainland (a mysterious and seldom visited land by this island hugging poet.)  I confess my ignorance of this varied and surprising world and will hopefully correct it by dedicating quite a lot of time to it, in order to complete my journey along the SL Railroad System. The idea is to write many poems as I travel around the intricate system of train stations, junctions and switch-backs and the different lines, beginning to know the residents, shop keepers, and railway enthusiasts who have made their homes, and their lives near to the railroad tracks.
So, my Saga begins in  a place called Andiana City of Dubia, and the answer to my last post about what the two pictures had in common was simply that they can both be found bordering the Mainland tracks. I hope you enjoy my poetic version of my journey and decide to come and pick up a free train of your own and begin to see this little-known treasure offered to us all by SLRR and The Jers (Joint Eastern Railway System)
(open this music link in a new tab to enjoy while you read the poem)
Cold Cold Ground ~ Tom Waits

just another noob -powered Industry along the tracks

And so it began, her destiny in a  poor town under siege
Attacked, in the grips of cluster bombs, plane crashes, and laser fire
Having neither  job, home, hearth or a generous liege,
She began to ride the rails, forced to escape from her own funeral pyre. 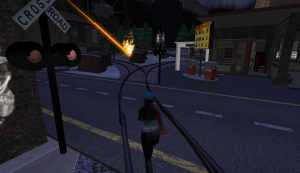 forced to escape from her own funeral pyre.

It was the War of the Worlds in this industrial city on the tracks
She never walked through the streets, but she ran, her heart a flutter,
And took shelter from the rockets, mid air crashes and shots to her back
In an un-manned pump station, across from the church, along the gutter. 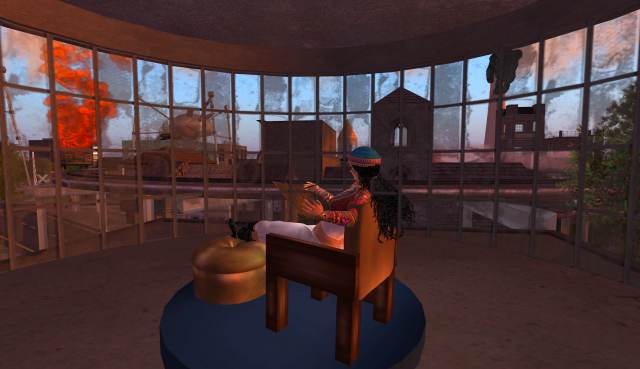 Holding up in the pump station...writing it down

She thought she heard the sounds of zombie soldiers on midnight prowls,
Her imagination sparked by adrenaline and low blood sugar churning,
Outside the convenience store lay a poor victim cut in half and disemboweled,
Her appetite was lost on every corner, watching the town go down burning.

"Her appetite was lost on every corner"

Avoiding the dead, the loneliness,  dropping bombs, and  hallucinations of King Kong,
Staving off starvation on pizza slices  snatched at the end of another horror filled day,
She ran down to the train station hearing a free give- away train had come along
She never looked back as she jumped on-board and made her  desperate get- away.

"...Staving off starvation on pizza slices..." 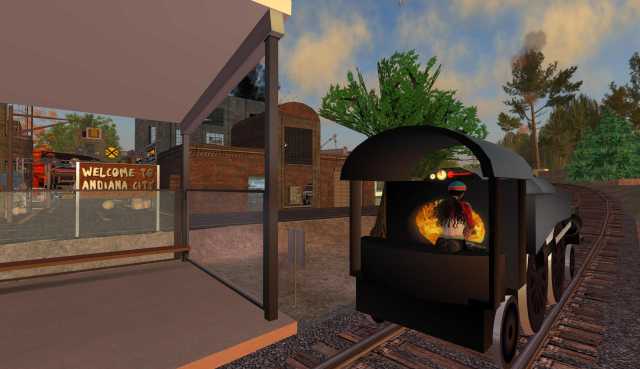 Karima Hoisan
Feb.11,2011
Andiana City, Dubia SL
©2011 all rights reserved
*my Special thanks to Jer Straaf of Andiana City and “Heavily Scripted Industries” for looking the other way when I took over the pump station 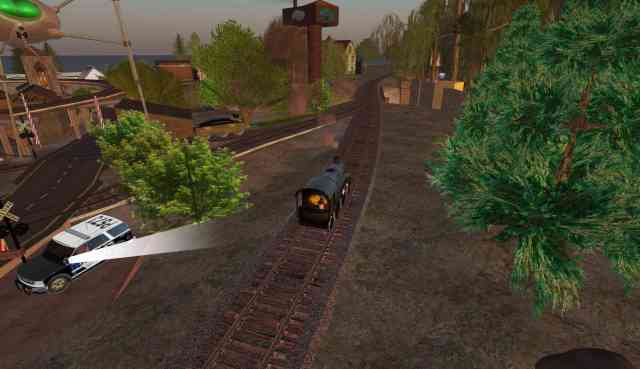 She never looked back as she jumped on-board

and the Saga continues…

This entry was posted in Poems, Slices of Second Life. Bookmark the permalink.