I think I will begin by showing you our movie:) This is the 25th collaboration for Randt & Hoisan,also known as The Team:) Please enjoy it in HD and Fullscreen and then if you are interested in a bit of the history on making it.. keep  reading below.

I could write a book about the making of this movie..but I think I’m too lazy; nevertheless, there are things that need to be said about this one..for the record and just to look back on years from now and remember the trials and errors and breakthroughs and near breakdowns we all lived through while making it.

I have revisited some of my other posts about our entries for the UWA and it seems I am always saying..that this one or that one was the most complicated etc etc, but objectively, I think “The River of Forgetting” wins that prize hands down! It was soooooo complicated to make this movie..that sometimes I felt really crazy..I would lose my concentration and would just stand there thinking…whaaat?

One of the factors that made this difficult was that we filmed about 95% of this machinima on Kitely-Virtual Worlds on Demand. It is a a great compliment to the Kitely machinery, that it was even possible. OpenSim in general, and Kitely in particular is stable enough and powerful enough to be able to shoot a movie of this caliber, get ample fps and be able to fill a world with many prims. It would not have been possible, even a few years ago. 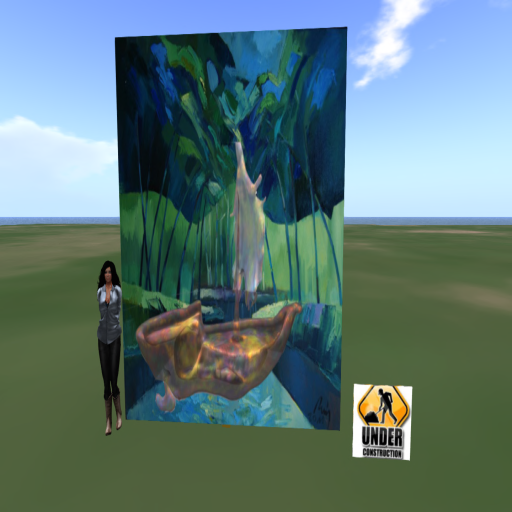 The other very complicated thing we had with this movie, is that Nat made the mesh clothes for the avatars to wear. The avatars themselves had to have the same body shape, height, hair in Kitely as they did in the intro shot and also backstory scenes that were shot in Second Life. We had to have rigged mesh clothes to wear and unrigged mesh clothes to throw. We had to have some unrigged clothes to throw that were physical, but we also needed non-physical unrigged clothes to add my swirling textures and make them disappear with a script. Just keeping this wardrobe together, remembering what had a script, what had textures, what was to go into a cannon and be catapulted in an arc into the water just as an avatar was throwing it folded up… was all very complicated to say the least. 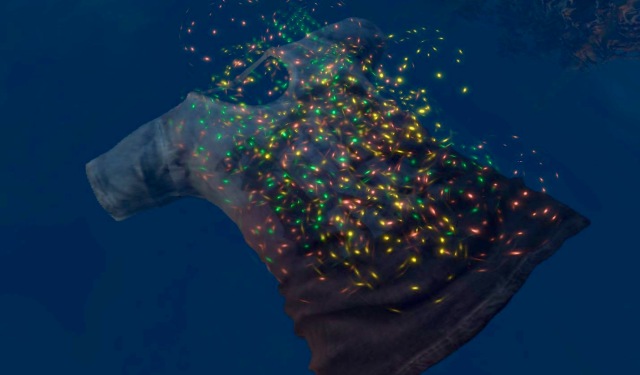 No littering of the river….everything that fell in was dissolved by little river creatures 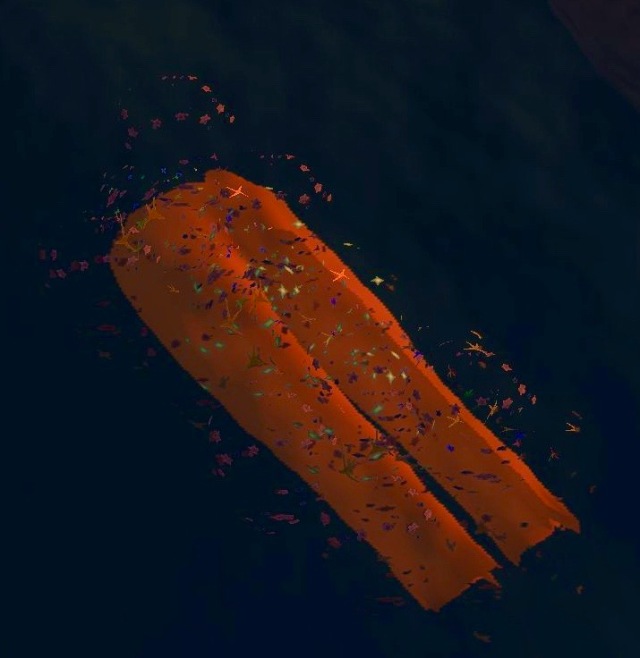 We had some textures that were triggered by just landing on the water, others, we had to write /99108 and others we had to write /99107.We had to bring in bvh motion capture animations and alter them and make our own tossing and throwing animations that would look close enough to the real thing. The main thing is that all the fading and disappearing and swirling were done in real time. Each had to be coordinated to the ship, moving away, the cannon lobbing clothes, the avatars dropping their backpacks or tossing their jackets. We never used particles…all the special effects were done with rotating textures…and I think in the end, it worked! Dale and I earned our SFX credit by working closely together and texturing each piece of clothing, each picture, each knapsack that fell into the water.

It doesn’t look like a lot,  when you see it in the film, but it got so confusing, our workshop was scattered all over a lawn, and half the time I didn’t even know what was what..linked? unlinked? scripted? unscripted?
We even had a hard time figuring out when we could get our little foursome together for shoots and it was what started us using the expressions “rigged and unrigged time”  that everyone learned to understand somehow..and we managed to pull off our shoots in both Sl and Kitely with some kind of schedule….and much laughter…and much unrigged time:) I think we went through daylight savings, but then some of us (the unrigged ones..didn’t)
Apart from almost coming unrigged myself during the process, it was a lot of fun too and Nat got to do some very innovative filming. I hope you will agree.

Now to the star of our video! The undisputed star is Silas Merlin’s gorgeous and colorful pastel boat entitled “Funerary Ship” Silas made this movie possible by allowing us to take his SL Art Work off the grid and permit us to import it into Kitely, where I had the possibility of building a sim just for it and our UWA project. 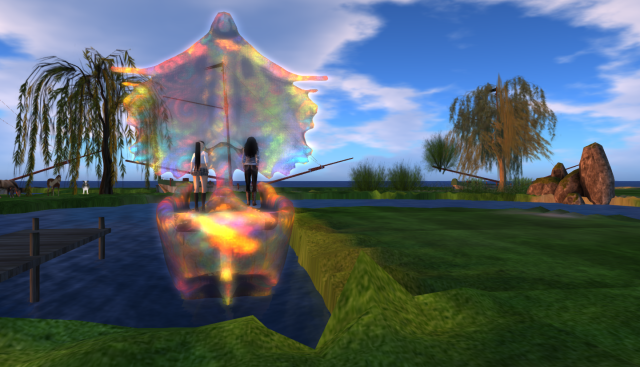 It was a moment of rejoicing for Nat & I

Nat, meanwhile, was building an SL set for the beginning of our film, while I was making the Kitely set. 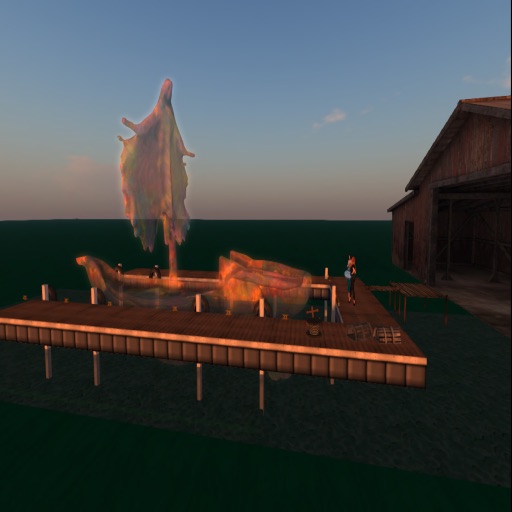 Nat’s beginning of her set for our film in SL

We worked closely with Silas and he was willing to give us the textures he used on the ship, so Nat could make avatars from them, and I could make a landing ballet tent for the final dance. This movie would have absolutely been impossible to make, if it weren’t for Silas’s total cooperation and willingness to help. 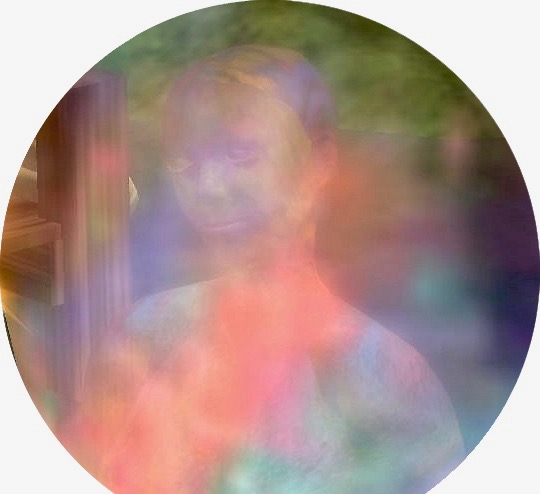 Interestingly, when I first saw the Ship at the UWA and told Nat about it, I thought we could use a poem I already had that I recited to the music of the composer, David Darling. It was about that final ride, down the river Lethe, and it was about death and crossing over to the final shore. Before I read Silas’s “About My Entry,” we had begun to work on this idea and I even wrote to David Darling and asked permission to use his music “Untold Stories” (which miraculously he gave me:) but by then..I read Silas’s motivation and….well it changed EVERYTHING. I had to find new music, write a new poem and align our movie with the artist’s reasons for creating his art piece. This was something so new for both Nat and I..but we flowed with it and I am so happy we did.  The music,”Between Worlds” by Roger Subirana Mata gave me “goosebumps” the first and the 100th time I heard it. It is an amazingly emotional and beautiful piece of work, and I bought a license to use it on YouTube from Jamendo for this project.
Once again, Dale Innis was instrumental in moving our boat and all the scripts we used to make our special effects. Without his help, we could not have pulled this off.
I’d love to have a $ for every time I said, “Nat, you’re going to kill me..but…butt…” We literally changed horses (or ideas) in midstream and listened to the soundtrack and tried to just…”let it go” 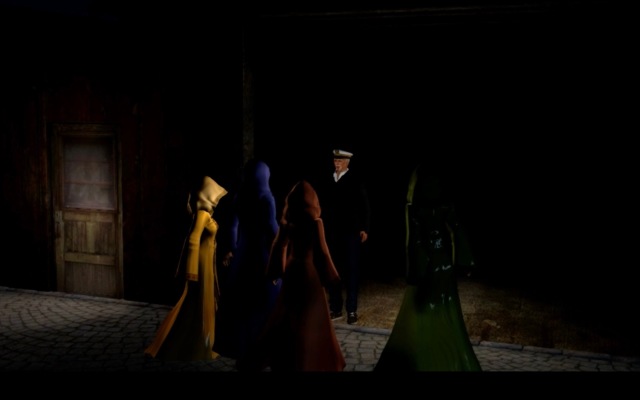 Negotiating with the Captain

Last but not least, a very heart-felt thank you to our wonderful cast. They showed up when we needed them and most importantly, were so much fun when we filmed them, both in SL and Kitely in both rigged and unrigged Time too:)
Nat and I have it very clear and agree on this last point. No matter what happens as far as the judging goes; if Silas is happy with what we did with his Funerary Ship, then we are happy too.
This one is for you Silas, your talent and your generosity of spirit!! It is our hope that we have honored you, with our entry..