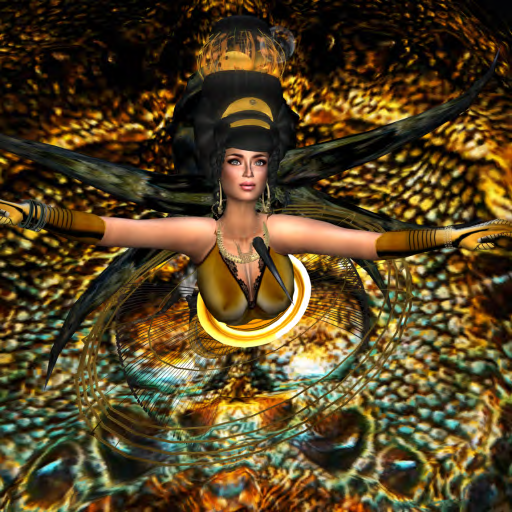 Ta Da!! Here I am in my Post-Human Baroque styling, pierced in
the heart by my very affectionate cephalopod so let me tell you how I got here…
I had the wonderful opportunity to visit Claudia222 Jewell’s new art installation last night at Pirats Art Network. I had already been put to dream and babble poetry by her one on Farstar entitled “Parallel Worlds”, and actually that is where I caught up with her last night, when I hooked up with my artist friend Rag Randt to see her build.
RAG and I had been flying over my own sim and I was going to show him a picture of it, as I was in an animated description of how incredible her organic textures looked, when he said “Well let’s just go there”
In SL, a teleport is worth a thousand pictures, and we were off to visit her Parallel Worlds. I joined the group and picked up her free gift, an amazing creature called a “cthuhul” which is a winged fantasy transport to be used to view her installation in style and in theme.
I once again felt that truly I had fallen into a parallel world, but unfortunately was not dressed for it. My garish purpley-blue and red had nothing in common with the rich, golds, greens, and thick colors of her creations. By luck Claudia was there and we chatted, and then I realized somehow, the opening of her new show at Pirats had totally escaped me, and we whizzed off to see what we had missed. 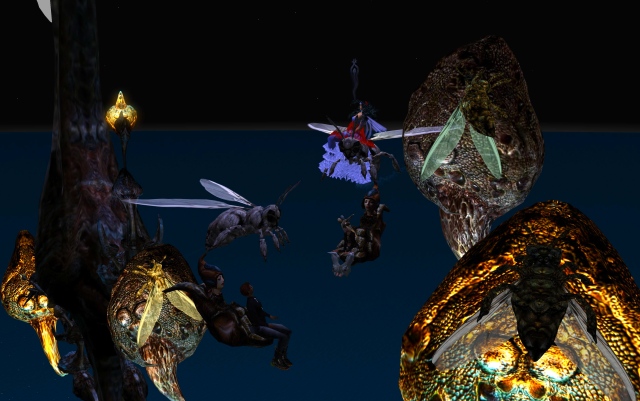 Claudia, always the very generous and gracious hostess helped us find our way up to her artistic new dream-build of pale moths and beautiful props of quartz and jeweled rocks, abalone turquoise against gold beading..so breath-taking. RAG jumped on his own moth transport and I hitched a ride with Claudia and we had a private tour of her creative color sense,  awesome texturing techniques, and just her artistic imagination come to virtual life. 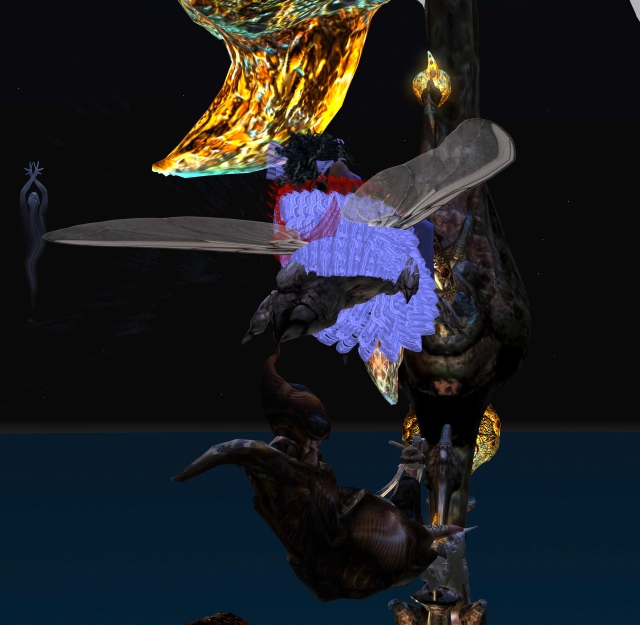 Riding with Claudia222 and loving her world 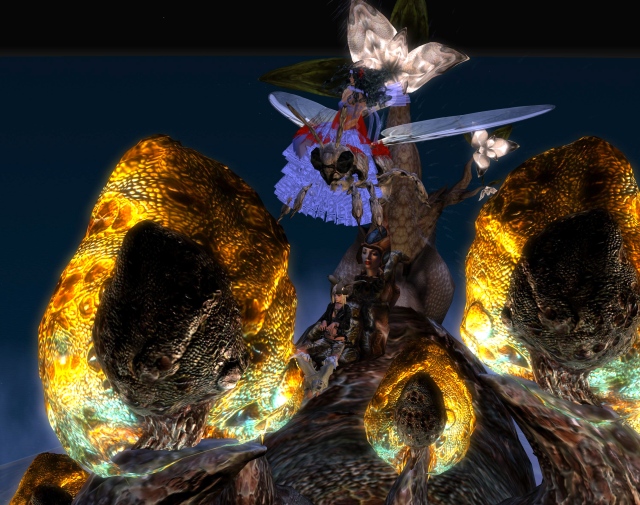 She told us she got this entire build together in 4 days, and used a few things from her other one, but most was entirely new… that working under pressure like this was a “nightmare” but we both agreed that the final product was far from it…so far from it. Every where we flew around,we admiringly “ooed” and the build goes from 60 to 80 meters. We saw first hand what she meant about how the clouds “got in the way” too. At one point in her own words she described a section as ” like fungus dripping in a honey cover…mushrooms…and the moths breeding and get ready for a life” Wow… must be experienced to believe!
It was nearing 6am on Claudia’s side of the world, so we thanked her and waved her off to sweet dreams, then set off to see a bit more, before our own time clock expired. This place needs more than one viewing, as the minute detailed textures can keep you hung up in one spot for a long time. I couldn’t stand it anymore, and changed my clothes while flying around. I hid behind a moth breeding area and found a more suitable Steampunky -Post-Human Baroque outfit (complete with bubble blowing gold-fish in my helmet) and breathed a deep sigh as I now felt in vibration with gold hues and beyond.. 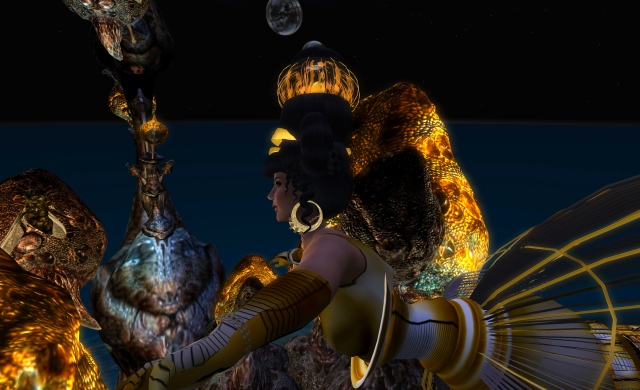 RAG and I went over to visit the octopus who I had already met, or perhaps his first cousin, on Parallel Worlds. This Cephalopod was feeling frisky and amorous and before she left, Claudia told me he had said hello to me by name, so he might have been the one I had a sweet but short-lived affair with on Farstar..They really Do all look alike (see post)
Well I swam/flew past him and I caught that glint in his deep- set brown eyes that at any minute glow orange with chicanery. He made cephalopod cooing and whistling sounds, that sounded like he was going “psst psst” and his tentacles were all over me as I passed by. 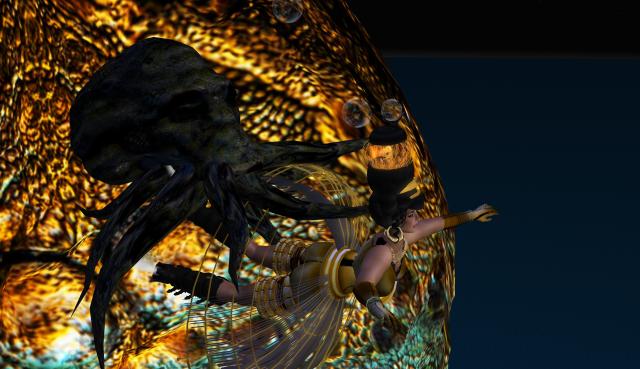 wolf whistles and all arms that frisky Cephalopod

When I yelled to RAG that he was getting a bit too comfortable with me,(the octopus not RAG:), he came rushing over and got under the hood to check for…hmm maybe teeth?, or sexual maturity?..hard to know what is under there, but RAG looked like a doctor about to give a diagnosis. 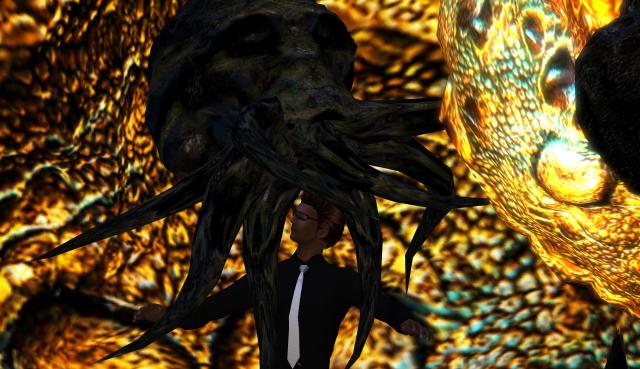 “This is a fully adult male octopus” he declared.
No news there, as I had just slipped away from his last advance, and barely so. 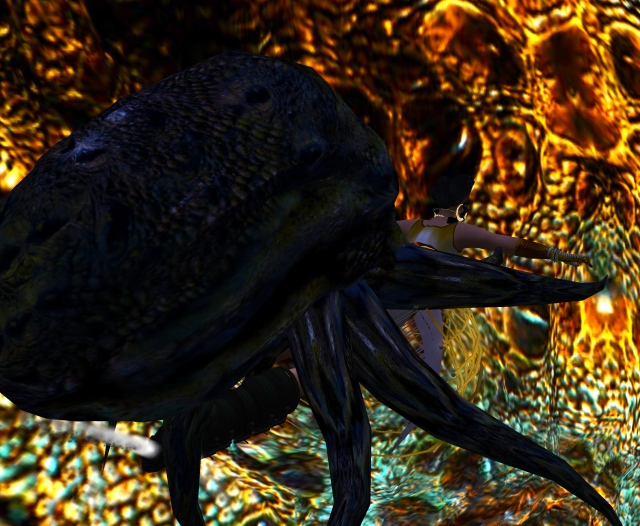 He was not trying to teach me dance steps...

That spineless romeo was not trying to teach me dance steps when he jumped me from behind. I was pretty sure of that, or that he wanted to give me swimming lessons (backstroke?) Anyway, the hour was late and I said goodnight to Rag and blew one last kiss to the frustrated Cephalopod and banked sharply for the long flight back to my own sim. 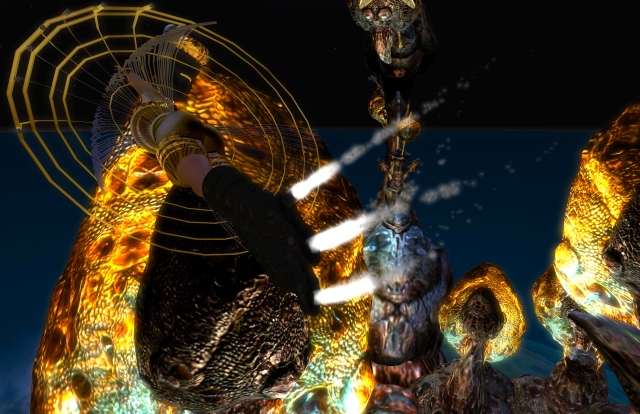 My night didn’t end right then, because as soon as I got back, I just had to try out my group present that I got from Claudia’s Parallel Worlds. I rezzed it on the ground, jumped aboard and typed “start” Ahh… I feel another adventure coming on… and it even has black bubbles that follow you while you flap the airways. 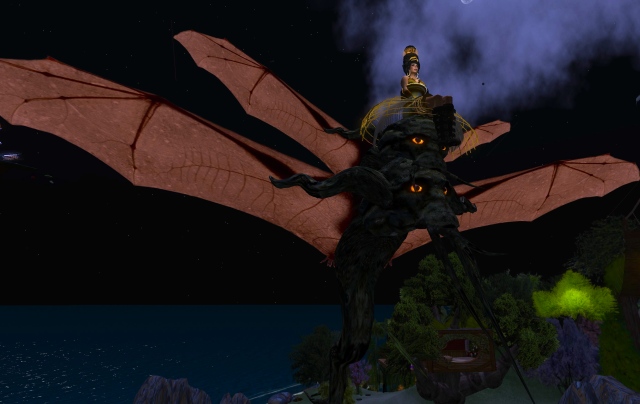 As far as group gifts go...this cthuhul is the most wonderfully bizarre

The creature breathes like a respirator, eerily and rhythmically and maybe I was a bit heavy but it flew valiantly. We were illuminated by moonlight, sim breeze behind and giving us lift..While I counted the seconds that the black bubbles held their murky draped drawing- room colors. I whispered my silent thank you to the one responsible for this unforgettable evening Claudia222!!! For all of us here in Second Life lucky enough to see what you create and do, you are a Jewel with a double “L” 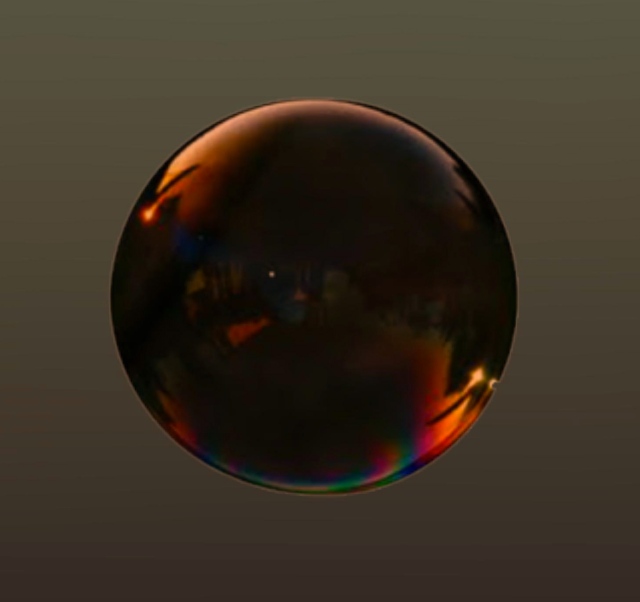