The Very Best Day Ever in New Toulouse!!

“Laissez Les Bon Temps Roulez”
“Let The Good Times Roll!”
Last Sunday Feb. 15th The good times rolled, they pranced. they hopped and they danced at the very first Krewe Bayou Parade. Wild and Wonderful Creatures took to the streets of New Toulouse in a Mardi Gras Mood; colorful, noisy, weaving and just one crashing, the parade snaked through the streets, bringing joy and beads to those spectators who cheered from the sidelines.
Miss Francesca Alva was the small but mighty leader of the party-pack, and gracefully keeping everyone in line (sort of)from the very tall Trombone Creature (Quiet Wonder) who set the pace, to TheToad King bringing up the rear. Parade participants ranging from tines to chariots, a horse-riding kraken, and other mutations, like equestrian butterflies, a very cute but tiny Mayor Henri, superman, and umbrella dancers added to the magic and the color of the event, When it was all over, everyone agreed that it was the very best parade ever that New Toulouse as ever seen. Here is a great movie shot by award- winning (and my video partner) filmmaker Natascha Randt,
Thanks to Natascha, we can keep these memories forever. Thank you again Nat!

Then, at 2:30, Taloosters who were not yet too drunk, assembled back on the ferry dock to “Oooo ‘n Awwww” at a spectacular fireworks display shot off from the top tier of the steamboat. There were cheers and funny comments, and admiration for the very awesome display overhead. Spectators were witness to a 20 minute finale, something that is rarely seen outside China.

Fireworks on the River
photo by Liza Veliz

Everyone went home to change out of their dusty costumes, take showers and come back for the big celebratory dance at Kari’s Bar and Dance later that night. 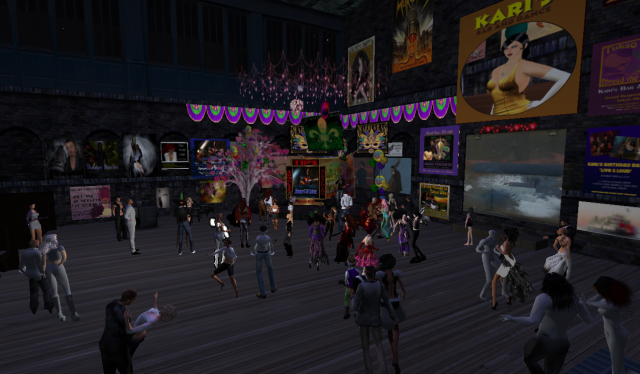 Live Musician, Jimmyt Dukes entertained  an enthusiastic and appreciate audience of nearly 50 (49) gatherers for an hour, with some classic and newer Blues and some original songs too. Balloons and confetti rained down on the club, the liquor flowed especially the Guinness and the absinthe, and a few opium pipes could be seen turning the air a cloudy, dreamy blue.
The after- show went on and on and on, a few hours more until finally a naked neighbor (not mentioning any names) rode in on a horse (possibly another neighbor) and ran over a few customers and then out the dock door.. Pazzo (dressed as a horse who drank too much absinthe) took that as his cue to leave too.
Miss amira helped me not only dance, but clean-up too. 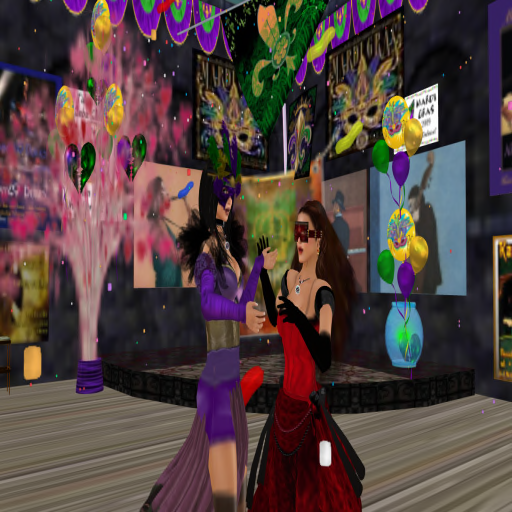 The party slowly wound down after, and I am quoting our own Mayor Henri when he said,
“This is the best day we have ever had in New Toulouse!”
I totally agree! New Toulouse has a community spirit and spark rarely found in SL anymore these days, but still very much alive in our hearts and in the streets.

1 Response to The Very Best Day Ever in New Toulouse!!