Was It The Spice?

(please open the music link in a new tab to enjoy while you read the story)
music:Mara Yhaninie

Last Saturday I found myself back on Splintered Rock, a wonderful creative sci-fi desert outpost role play sim owned and run by the constable Darren Green(vooper werribee)
It had been quite a while since I entered into any deep RP there, but I was invited to have my “mugshot” taken anyway. The creators of Combat Cards were making a Splintered Rock deck of cards, and I was to be one of the characters. My character as a Desert Native, had retreated to her tent in the high hills of Wadi Emet and was studying, meditating and writing quite a lot of poetry, so it was nice to see a few of the fellow residents there lining up to be photographed. 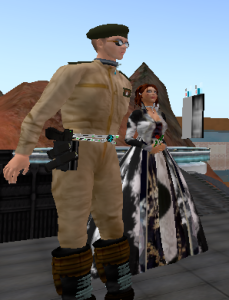 Darren Green and Ariadne Fall keeping order on the set

I was most impressed by the photographer, Osprey Therian, an ebony beautiful alien who seemed to really know what she was doing. 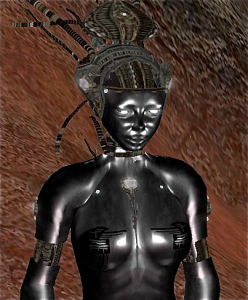 I put on my favorite belly dancing gesture and felt the heat of the dry wind  hit me in the face. I remembered the smells, the skyline and it was a great feeling to be back in this part of the world. 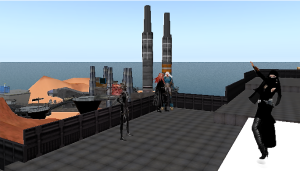 Osprey Therian, Albert Starsmith & his Lady Mocha Velde and myself

I danced…Osprey snapped, and a subtle music of missing this part of the desert began to play in my heart. Maybe it was the spice that had turned my normally very dark eyes into a shade of violent indigo, but I was filled with nostalgia for this unique and creative sim and the people who live and play on it. 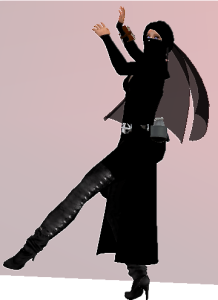 When she finally yelled “Cut! We are finished” I was hot and thirsty, ready to make the very long and perilous trek back to my home, the neighboring sim of Wadi Emet. Although I enjoyed the company of long-time residents I had not seen, it was time to return to my Bedouin tent hidden high in the hills where I was quite accustomed to habitual hermiting. 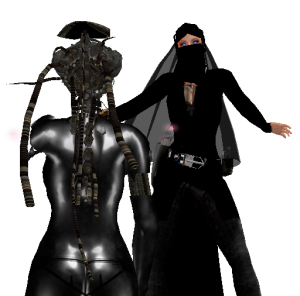 “Cut”, I heard her say and breathed a sigh

Mediating at home Shai-Hulud the Sand Worm below

Was only home a few minutes, when to my surprise I had visitors come up the hill and ascend upon my tent. As I am a traditional welcoming desert hostess, I invited them in, even if one was a non-humanoid creature, an otter to be exact, and the other was a humanoid but dressed in clothing that I had only seen in a history book of Old Earth from the Warhol Pop Period. I am not used to guests of this type, but I was gracious, as is our Native custom, and motioned them to sit by my fire as I proceeded to make my special blend of spice and cardamom coffee. Just for good measure, I added an extra pinch of spice to the mix. The sun was beginning to set as I served them their first cup. 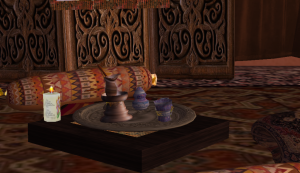 The otter, also known as Scottius Polke, seemed to relish the coffee and drank it down in one gulp although I had warned him it was spiced. Non-humanoids are very hard to reason with sometimes, and this one was an artist on top of it…really almost impossible! 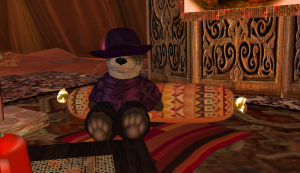 Scottius Polke  “He drank the coffee down in one gulp”

My other visitor turned out to be an artist too, Chrome Underwood, a throw- back from the retro days on Old Earth. 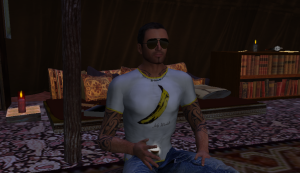 Chrome Underwood who appeared to be from the Warhol Pop Period

He also chug-a-lugged his drugged coffee, not heeding my warnings either. Oh well….what could I do but wait to see any adverse effects?

It didn’t take long to see the effects. As I picked soothing chords on my Kalika to entertain them, Chome began to levitate in typing mode a few minutes later. I looked over at the otter and he seemed to have gone unconscious, was inert, his little neck-less head fallen to one side. Chrome was declaring over and over that his levitating was a miracle and had nothing to do with the  over-dosed ingestion of melange spice. Oh artists!

Scottius was nodding and Chrome preparing to levitate 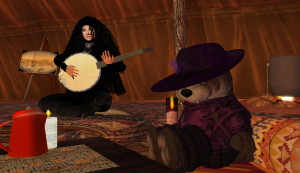 “… his little neck-less head fallen to one side…”

I all of a sudden realized I was the only conscious one in my tent. The snores and occasional babblings of  the otter were now offset by the fact that not only was Chrome hovering in the air in lotus position but he had gone unconscious too

The wind howled, my guests were mute, only the sweet sounds of the mournful strings of the fine-tuned Kalika pierced the desert night air’s silence. Was it the spice?

This entry was posted in Slices of Second Life and tagged second life, Splintered Rock. Bookmark the permalink.

9 Responses to Was It The Spice?