You Brought The Music 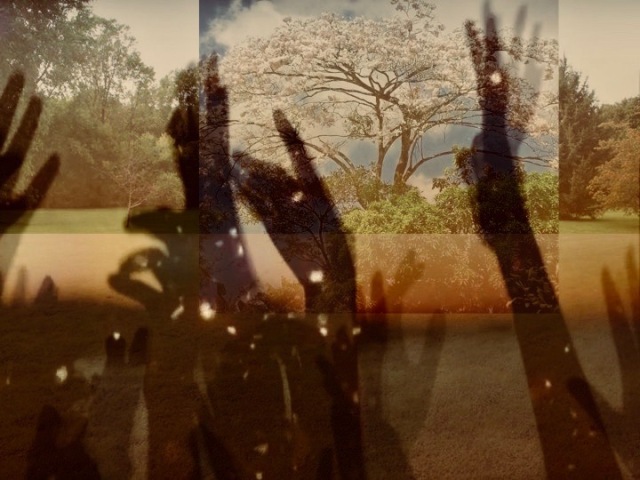 You Brought The Music
for Sundaram
(from a dream)

In a dream I had this morning, you brought the music and a friend.
I was living in a cottage with a park that stretched for miles
laid out in front like a soft green carpet floor.
You said, “Come on let’s dance and grabbing each my hand,
you both pulled me out the door.
You brought a box you said would play the music and even before
you got it in its  place  it was pumping out these amazing sounds
I had never heard before.
But.. it made me want to move my feet…and we all began to dance.
We three lifted our weightless arms in the air,
we moved so gracefully as if we were but leaves
being tossed on the fragrant breeze.. that carried
along with us, the smells of incense, flowers after a rain and
a beautiful flowering tree, standing there, like a centerpiece.

In the four corners of the park, we saw people gathered somberly.
Some were praying or hearing lectures and it seemed various
religious sects, were accustomed to meet there weekly.
Some were standing, some were kneeling, some were meditating,
I was wondering if we might be trespassing, but I saw that
the center of the park was free.

The sun shone down upon our faces and we all felt so alive,
The warmth, the smells, the music, and our beautiful hands,
stretched up almost touching the sky,
Our feet swaying and twirling to the beat,
I looked over at you laughing and I was laughing too;
you mouthed a word and the wind brought it to my ear
in a tone of joyous abandonment..you whispered, “Magic!”

Then the people in the corners of the park, began to leave..
Some were walking to their cars and some just walking down the street,
but a few came walking towards us as if they had something they wished to say.
We never stopped our dancing, but we looked towards them on their way.
The taller man, as the spokesman for them all, addressed himself to me.
“You know these men are Hindu and you are Muslim, he said accusingly,
and here you are dancing in this park, in the light of day, in a public way.
“Do you have anything to say for yourself anything you could possibly say?”

“Well yes, you are correct I am Muslim and they are Hindu…
and just look how beautifully and gracefully we dance together!”

33 Responses to You Brought The Music